Recently, I've been fascinated with alternative/electronic/classical groups. "What the Gucci does that mean?" you may ask. Imagine an electronic group covering classical music, or an orchestra covering alternative tunes, or a rock band covering electronic classical music. Since I can't seem to explain the awesomeness in words, here are some songs:

Ebla -- E.S. Posthumus
Holy guacamole. Seriously, the music of E.S. Posthumus is the type of epic music that would make any action movie/video game fanatic happy to die to. It is the epitome of monumental action flick soundtrack music. In fact, their music has been used in pretty much every action/adventure movie, including Avatar, The Matrix, and Pirates of the Caribbean. Other cool songs by them: Lepcis Magna and Unstoppable.
Time is Running Out (Muse)-- The Section Quartet
This awesome song was originally created by Muse, who I also love dearly. Honestly, this song is even more quirky, yet beautiful when performed classically. I guess I just love the drama and artistry of Muse and The Section Quartet. :) Other amazing songs by them: Such Great Heights (The Postal Service) and Black Hole Sun (Soundgarden).
Music for a Found Harmonium -- Patrick Street
Whether this song is done by Patrick Street or Penguin Cafe Orchestra, Music for a Found Harmonium is a fantastic tune. It's folksy/familiar sound always makes me think of my childhood when I would run around and pretend I was a creature of some sort. Anyways, you should totally check out both versions, and you might recognize the song from Napoleon Dynamite. Another wonderful song by Penguin Cafe Orchestra: Perpetuum Mobile.
Epoca -- Gotan Project
Gotan Project has a totally different take on the electronic/classical genre by incorporating Latin sounds and familiar tunes. Their songs are also quite popular in Hollywood, and have been featured in such movies and TV shows as Ocean's Twelve, So You Think You Can Dance,Chuck and Top Gear. They're also the perfect songs to tango too! Other great songs by them: Mi Confesion and Diferente.
Born This Way (Lady Gaga) -- Aston
If you ever wonder what any of your favorite pop songs sound like all instrumental, you should definitely check out Aston. They have done Telephone (Lady Gaga), Rude Boy (Rihanna), and even Toxic (Britney Spears). It's simply mesmerizing to listen to them.Other songs by Aston: Viva La Vida (Coldplay), Only Girl (Rihanna), E.T. (Katy Perry), and  Bulletproof (La Roux).
Well that's it for now! :)
Posted by Mika Elan at 6:14 PM No comments:

I just came back from a trip to Hawaii!
On the way to and back from the island, I thoroughly enjoyed looking at the unnecessary, eccentric gadgets in Skymall magazine. As every traveler knows, Skymall is the quintessential source of awesomeness. Here are some of my favorite products: A Box of Applause/Laughter for 30 bucks??? I think yes. Necessary by all means Key words: Not for use while driving. I wonder what happens if u trip and fall... Laziness at it's most innovative
And on a totally random note -- for those who are Doctor Who fans:

While I was writing a paper on Jesus one day, I looked up some images of The Last Supper by Leonardo da Vinci. Some pictures of the original came up, but most of them where creative renditions that I thought were quite awesome. Here are my favorite ones that I saw: 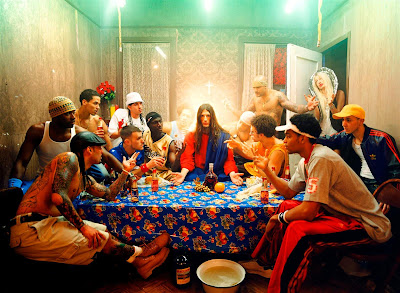 Hope you enjoyed this random blog post :)
Posted by Mika Elan at 8:36 PM No comments:

Mika Elan
I'll admit it right now, I am nerdy. I go to Comic Con every year no matter what. I have two Rainbow Brite shirts. I am not your typical teenage girl, or am I? I have noticed there are far more nerdy girls than trendy, popular girls in this world. So I have created this blog for all the girls out there who dare to be different, unique, and nerdy. Enjoy and email me any questions! ;)